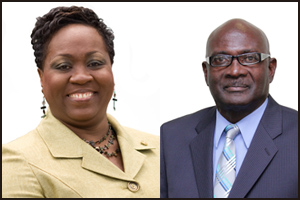 We are the largest island in the British Leeward Islands and because of our economic growth, citizens from the bigger islands including Jamaica, Guyana will come here seeking employment and a better standard of living. Also, Antigua is a strategic place. You can get a direct flight from Antigua to the US or London whereas if you are flying from other places you have to make a stop. Our airport is the best in the Caribbean.

Mrs. Blanchard: As a people, we are very hospitable and friendly and that is why we excel in tourism and are easy to do business with. Also, our crime rate is very low.


The first things that an investor looks for prior to investing in a foreign country are a lawyer, a trustworthy bank and an insurance company. What does the Antiguan financial system offer to assure investors that they are coming in to the right place?

The investment climate here is good and it is a safe haven for investors. You don’t hear complaints about money laundering in Antigua because of the good system that we have in place.

Mrs. Blanchard: We are number two in the market. We pride ourselves in making sure that we look after the grass roots persons in Antigua. The philosophy at SIC is to ensure that all Antiguans can afford insurance whereas previously only a very small percentage could afford it. SIC has brought insurance to the regular man on the street and ensures that the insurance is not only affordable but also of high quality. We do business with reinsurers in Europe so we are not only a local company but we do also have an international reach with international affiliations. One of the reasons why SIC is so successful is because we are in a stable economy in Antigua and here we use the Eastern Caribbean dollars, which are very stable. Also, we comply with other regulators’ regulations. There’s a very strong regulatory framework in Antigua, for example, we have the Financial Services Regulatory Commission which comes in and does audits.

Also, we offer all classes of insurance including life, medical and marine, and have a board of directors that comprises of seven and is appointed by the Cabinet of Antigua.


State Insurance Corporation has established a reputation as one of the leading insurance companies in the country. The difficulty, however, is not being on top but maintaining the status. What are the current challenges in today’s insurance industry that SIC faces in order to preserve its top status?

Mrs. Butler: One of these challenges is perceived ownership and involvement of government.  We are allowed to operate as a private company with very little or no involvement by the government.

Mrs. Blanchard: We have to offer affordable rates but the pricing in the market is one of our concerns. Also, there’s the perception that we have to constantly battle with which is that a local company is not as efficient as a global or regional company. So, we have to at times work maybe twice as hard as another company to convince our clients that we are good, offer professional service and top customer care, and operate at international standards. Also, our Europe-based reinsurers are rated number one.


The insurance industry in Antigua and around the world is fiercely competitive. Why is the SIC the partner of choice?

Mrs. Blanchard: Our financial strength is the main reason why international companies are pleased to be affiliated with us. Not only that, our reputation throughout the years and the fact that we have been able to stand the test of time because we have been through quite a few catastrophes including hurricanes. Some other companies were unable to hold their own but because of our structure and strategic plans and commitment to running our business professionally, we have been able to build the confidence to actually maintain these linkages.

The people of Antigua have confidence in us because we have a department within this corporation that includes our auto plus line. By establishing that department, when you insure with us and you are out on the road and get a flat, we come to help you. That has spread the word around and is why so many come to insure with us. Not every insurance company offers that service.


Innovation is essential for any company’s future survival. In a world that is exponentially more universal and competitive, innovation is crucial. What is State Insurance Corporation doing to innovate and stay competitive?

Before March 2017, we intend to complete the rebranding of the entire corporation. January is our 40th anniversary so we also want to repaint our building before then to help give ourselves a new image.

Mrs. Blanchard: We have quarterly road shows and a mini motorcade so we advertise our products and partner with young drivers that are involved with motor vehicles. We also do quarterly reviews, do market research and make sure we get feedback from our clients to make sure that our products are actually satisfying needs and wants of clients. We also have an open-door policy so we encourage persons to come directly to us if there’s a problem. We also do an annual assessment.


CSR is a useful measure for helping the communities and giving back to the hard-working personnel that makes up the company. What CSR projects are you most proud of? Are there any new projects underway or any planned for the near future?

Every year we sponsor a junior calypso competition where young people will compete and that costs the corporation more than $30,000. We have also sponsored quite a few other initiatives.

Mrs. Blanchard: We also support the arts and education. We sponsor, for example, spelling competitions in schools so young people remain competitive and keep up with their education. There are times when we also sponsor sporting activities so we try to impact a number of areas.


State Insurance Corporation has almost 40 years of experience in the insurance business. What managerial skills set does a GM of a highly successful entity like your need to have?

My career started at the Bank of Nova Scotia in 1970. In 1971, I became the credit officer for the Antigua branch at the age of 24. In 1972, the bank wrote to me and said that they wanted to move me so I could gain more experience. They sent me to Grenada in 1973 after I had just got married. I was in two minds whether I should take the appointment or take another job that would mean I didn’t have to leave. I decided to leave under the condition that the bank would promise to bring me home after two years. But after two years, they wanted to send me to Guyana so I decided to take a vacation and came home. There was a position here and I applied for it and became manager. The bank, however, folded up and then I went into the insurance business, which I’ve now been in for 27 years. I founded the Antigua Underwriters Association and served as president for three consecutive terms and during that time, I did two courses. In 1994, the Caribbean Association of Life Underwriters headquarters in Jamaica appointed me to be the moderator of all insurance courses in Antigua. So, I believe I was elected Chairman of this entity because of my experience and qualifications in insurance. This year I was honoured by the Association at Congress.


The readers of Harvard Business Review include the world’s most influential business and political leaders. What message would you like to send them?

We are here to be a team player.

Mrs. Blanchard: Also, we are pleased that the general public has had confidence in us throughout the years. We are headed by a very competent chairman and general manager and as we move forward, we hope to grow throughout the region and beyond. We have clients who continue to remain loyal to us as we give them excellent service.

Mrs. Butler: State Insurance Corporation is financially strong with the support of A rated reinsurers. We have qualified and experienced technicians and underwriters. We have excellent products which have been tried and tested for instance by many hurricanes for example Hurricane Luis in 1995.