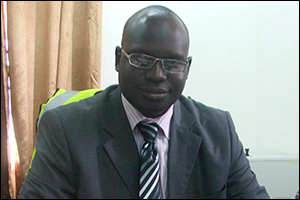 What do you think about Africa being seen as the new investment destination, and how do you see The Gambia within this context?

Investment in Europe is reaching a saturation point, which is a better reason to explore new frontiers. Thus, Africa appears to be a very virgin market taking into consideration the  infrastructure deficit prevalent on the continent. For example, the airports are not up to standard; the roads do not lead to villages, power is not accessible everywhere and so portable water. These are areas that really need investment. When investment is done in Africa, it means another market will be created.

The interdependent nature of the  economy in Europe, notwithstanding, there is the need for alternative markets where products could be marketed and sold. Definitely, Africa is the next frontier! Air travel in all forms of business is the next frontier and geographically, The Gambia is well positioned for this. For example, flying time to Europe is between five to six hours; USA eight hours; and most of the West African cities lie within a 60 to 120 minutes radius.

And not just because of the location, but also the fact that it’s a stable country.  The destination is one of the most stable countries in the sub-region. Thus, The Gambia has a role to play in that it prides itself as the gateway to Africa.

The Gambia Civil Aviation Authority (GCAA), established by the government of The Gambia is tasked to monitor and regulate the aviation industry in the country to meet the international standard. What is its scope of responsibilities in terms of regulations?

The GCAA’s regulatory scope is everything prescribed in the Chicago Convention. The GCAA’s primary mandate is to regulate air transport industry in The Gambia and it is doing that based on the Chicago Convention and all the technical annexes that come with it. These annexes are revised and improved almost on yearly basis and so are the Gambia Civil Aviation Regulations in order to keep pace with the rest of the world in terms of standards and recommended practices.

What is the comparative advantage of the Banjul International Airport under the control of GCAA?

There are a lot of advantages; first is the connectivity which is one of the GCAA strategic goals – to develop a hub in and around Banjul. This is because it is better to create ready and immediate access to the pool that surrounds the destination, which is the sub region.

Another advantage is the climatic condition of the country. Tourists come to The Gambia during the winter season because of the fine weather, this creates a lot of availability in terms of flights.

The other advantage is the fact that it has also gotten the last-point-of-departure status to the USA, whereby flights originating from BIA can fly direct to any USA airport. As an aviation authority and regulatory body, the GCAA is number three in Africa; third to only South Africa and Egypt, in terms of implementing ICAO Standards and Recommended Practices (SARPS). It means GCAA is effectively implementing what ICAO requests of it. So The Gambia is good for any airline to register as can be done anywhere else.

Moreover, The Gambia is an English-speaking country with flat land; basically sunny at all the times; the language of aviation is English and virtually everyone you come across within the country speaks at least bit of English language.

How do you attract those airlines to come and register here?

In terms of registration, GCAA is under pressure from quite a number of applicants who want to register in the country’s aviation industry. Our reputation has made us a country of attraction and our challenge now is to ensure that we keep the right balance in terms of Inspector-to-Aircraft/Operator ratio as well as ensuring that the qualification and experience of our Inspectors match the demands of the industry.

Do you have any other strategies to get The Gambia to be a hub in this region?

It is the GCAA strategy to have a home-based carrier, an airline that is based in The Gambia. This does not have to be Gambia International Airlines or so, but any one legally registered in The Gambia. It does not matter where the  investment comes from as long as the airline has  Gambian identity. Airline investment require orbiter financial outlay which could be a challenge to the local economy. A good background airline needs an investment; you need proper funding and once you set up legally in the country, then that company is Gambian, which is what the industry is exploring. So as an Authority, we are quite flexible and will give our support as long as the above criteria are met.

Talking about GCAA, could you give me some key figures such as the number of employees, annual turnover, and contribution to the GDP etc?

The number of employees is about 600 with the annual turnover around D400million (about US$10m).

We are just hoping that in the long run, this figure can be improved significantly when we start increasing the number of people coming into the country and also spreading tourism activities all year round.

What are the growth expectation?

It grew significantly at some points when we introduced the  airport development levy. The government is doing a lot of investments in terms of expanding the airport and those funds must be matched.  Right now we are having a US$33million airport improvement project. When it is done, the aircraft parking apron will be expanded twice its current size. This is important because on a typical day in the high season, the airport experiences a lot of congestions. Hopefully, expanding the airdrome will improve GCAA capacity and in addition to the expansion, there will be refurbishment work on the terminal, remodeling of  the interior that will allow more effective flow; provide a new instrument landing system; two new entry/exit taxi ways will be introduced. All these are to improve the runaway availability time among other things.

There are some talkes about building second airport in the country.  Do you see it coming in the near future and is it necessary at the moment?

It’s possible, but we believe the decision will be driven by trend analysis and the resultant growth forecast. Currently we have some good projections in terms of tourist arrival. There was trouble in Egypt, Kenya and also in Tunisia a year ago and we experienced a longer season and more people coming in to a point that there were situation of overbooking in the hotels for example. So we think it was just arithmetic progression. We feel we still have the right infrastructure, the right environment and everything for the current demands.

What have you learnt in your career that you implemented in your position and what are you proud of most?

What I am proud of is the fact that I work in an organization that puts in a lot of efforts to give its personnel good professional training, good exposure, good appreciation of the trends and technologies  to a point that we become a reference point.