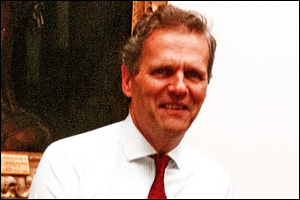 President Enrique Peña Nieto has made sweeping changing for the country through the creation of new laws, amendments, and reforms. The changes made in Mexico certainly show promise for the country, but what do you believe Mexico still needs to do in order to reach its full potential, economically speaking?

We see the whole package of the economic reforms as extremely positive. We believe that, if effectively implemented, they should really help to develop the economy of Mexico. They should help bring greater productivity, especially to those areas, which have been part of the state’s monopoly. The energy sector is of particular interest to the UK and British companies because it is a sector that I am sure you know the British are very strong in. We have a very strong track record in energy; two of the mega majors in the world are British companies; Shell and BP. BG is a fast- growing major company. But in addition to that, the development of oil and gas in the North Sea has led to the UK becoming the world leader in exploration and production in oil and gas in subsea. A big part of the Energy Reform here in Mexico is designed to attract foreign investment in deep water, exploration and production of oil and gas. We estimate that UK companies account for around 45 % of all underwater contracts in the world. And this is something I had not realized before I came here, but it is quite a striking statistic.

Implementation is key when it comes to future investment. I know that the largest energy companies who would like to come and work with PEMEX and invest in Mexico will be looking very carefully at the way the final contracts are drafted. We think the Energy Reform is great, but of course the devil is in the details. So the way these contracts are drafted is very important. The senior representatives of some of the British companies have expressed to me how competitive a game this really is. While they may be looking at investing in Mexico and are very excited about the opportunities in the country, the boards look at all the potential investment opportunities around the world. So, from the perspective of the board of a major oil and gas company, of course they will check that their ROI of what they would get from investing in Mexico is at least the same or better than what they would be making elsewhere. The detail of the contracts and the detail of their implementation become very important.

The UK also has an interesting track record in terms of electricity. We privatized the electricity market in the UK about 15 years ago. Recently, CMS, a British company, in partnership with the associate firm, Woodhouse Lorente Ludlow (WLL), has been selected to advise the Mexican Ministry of Energy (SENER) on the reform of the electricity industry in Mexico.

While many have held high expectations for the energy reform in Mexico, unfortunately and perhaps at the worst moment possible, oil prices are suffering an extreme low. Prices in Europe are beginning to rise, but the future is far from certain. Do you think this will demotivate companies’ investment plans, or do you believe this could be the right moment for Mexico to push for the sector to become competitive and attractive for foreign investment?

It will vary depending on what type of potential investment we are looking at. If we are looking at the exploitation of shale gas or shale oil, I think it is more speculative, and it is going to be more difficult to attract major investors into that right now. If you look at deep-water exploration and production, the time frame in which major companies are looking at ROI for those kinds of operations is very long-term, probably over the course of 30 years. I can’t speak for what’s going to happen to the oil prices over the next 30 years, but they have teams of people that analyze that very closely. And that is what they will look at to make their investment decision. It probably makes it more difficult for smaller companies or the less established companies to raise capital. Likewise, It probably makes less of a difference for the major companies, because they are very large companies.

There is an element in which in some ways it is a greater incentive for them to look for new business. When we went to Aberdeen with the President, we talked to companies there. Several British companies are operating there in the North Sea sector. They are having a difficult time because of the high cost of extraction and because, in general, it is a difficult environment to operate in. For them, the margin has narrowed. The government has reduced taxes for companies in the North Sea in recognition of the difficulty of the operation for companies in that sector. In my opinion, that probably provides an incentive for most of the companies looking for new opportunities to do business.

I think fighting against corruption is a permanent battle for all governments around the world. In some places there is more corruption than in others. We have been working very closely with Mexico in areas such as transparency and access to information. We have just undertaken a project with the Mexico City government that will promote transparency and access to information.

In a small way, we are helping them create greater transparency. Our view is that one of the best ways to reduce corruption is by making things more transparent. The more transparent something is, the more difficult it is for people to be corrupt. The more secretive something is, the easier it is for dodgy deals to be going on behind the scenes. This year, Mexico is heading the Open Government Partnership. During the state visit to the UK, both the British and the Mexican governments committed substantial funding to make sure this project continues to develop.

Otherwise working with issues related to corruption, The Bribery Act is quite ground-breaking in two ways for the UK. First, any British national or company can be prosecuted under the act, for any of the offenses within the act committed anywhere in the world. Second, you can be prosecuted as a manager within the company, not only for being corrupt or accepting a bribe, but also for not putting in place processes and training to reduce the risk of any other staff being involved in corruption. I am hoping we can bring some lawyers experienced in the implementation of the act and perhaps organize some workshops to discuss the impact of this law in British companies.

There is always work going on in order to tackle the issue. It is a permanent struggle. You will never eliminate corruption, but there are countries that are generally more corrupt than others. There is not a country in the world where corruption is zero, but every country should strive to be a place where corruption is not a factor in business. In some countries, it is just impossible to conduct businesses without corruption. In others, while there is corruption, you can still conduct business without being corrupt yourself.

The Dual Year is about raising awareness more than anything. Some years ago, the British Government was not paying a lot of attention to the Latin American countries. But now we are coming back. We have realized the potential of this market, and these countries are generally very like-minded when it comes to UK and European values. We should be paying more attention to them because this is an important part of the world. We have tended to focus on the Far East, South East Asia, and in some extent Africa—partly driven by our colonial history.

The Dual Year of the UK and Mexico was agreed upon before I became Ambassador. The objective was to try to make the most of the relationship between the two countries. When I came into this position, I decided I wanted to make it not only a cultural programme, but also an opportunity to promote education, science, innovation and business relations.

Coming back to energy—a huge amount of effort has been made to promote the opportunity here in Mexico, and now the challenge is to follow up on that and to see what we can do to generate more links. The real business exchange between the two countries is still modest, but the potential is huge.

President Enrique Peña Nieto expects to sign various agreements related to the collaboration with the United Kingdom on energy matters. Are you already feeling an influx of foreign investors coming to Mexico?

How can the embassy help British investors when they come to make an investment?

Both Governments and Embassies have a significant challenge now, which is to take forward all the awareness and interest resulting from all these senior visits. The question is; how do we generate more business at this point?

This means more state visits, more trade missions to raise our profile, more business delegations, etc. A lot will have to do with the energy sector, following up with the President’s visit to Aberdeen, the energy agreement we signed, and bringing energy delegations to Mexico for them to see the opportunity.