Namibia: Interview with B. Bertolini
All Interviews 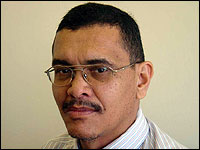 Could you please present the background of Namibia Asset Management?

The background from which we are coming is a very interesting one. If you look at the whole development of the Namibian economy, one of the key aspects is the pension fund industry. For instance, during 1993 and 1994, there was basically no pension fund industry. In 1996 the government thought that we needed to create Namibia’s own pension fund industry because before all the money used to flow into South Africa. As a result, the government decided to encourage the establishment of a Namibian asset management company. In life there are two basic physics laws namely cause and effect. For every cause there is an effect. Like in this case Namibia Asset Management was the effect of the government’s desire to establish a local asset manager. A group of Namibian businessmen responded to the government’s appeal. Since they did not have the necessary skills they went to South Africa in search of a reputable strategic partner who had asset management skills and they found Coronation Fund Managers. We started the business with N$1,2 billion of funds under management. At present the assets under our management are close to N$6.7 billion and we have a staff compliment of 12 people. The creation of the Namibian pension fund industry resulted in the establishment of a stock exchange, stockbrokers, asset management consultants, benefits consultants and actuaries. It was basically a new industry that was created by the decision to keep and manage 35% of the Namibian assets within the country.

In 1998, our holding company Namibian Harvest Investments Limited was formed and this was listed on the Namibia Stock Exchange. Namibian Harvest was the result of the Black Economic Empowerment drive that was happening in South Africa. Through a strategic partnership between Coronation Fund Managers and trade unions African Harvest was created in South Africa. African Harvest was listed on the Johannesburg Stock Exchange. Capital was raised with the idea of taking strategic stakes in various quality businesses in the South Africa. The plan was to role out this model into the rest of Africa. Because we had a relationship with Coronation, Namibian Harvest was formed and listed on the Namibian Stock Exchange. N$200 million was raised with the listing. Namibia Asset Management became a subsidiary of Namibian Harvest. The idea was to use the N$200 million to fund Namibian Harvest’s participation in some expected consolidation in the financial services sector in Namibia. At that particular time, they were contemplating, amongst other things, a merger between some of the banks. The objective was to deploy the money in the Namibian financial sector. Unfortunately the plan did not work out. They ended up giving back 60 cents out of every N$1 of the N$ 200 million to the investors. Namibian Harvest did invest in 3 companies in the financial sector but these were not a success and we reverted to focusing only on asset management again. This is where we are now. We have Namibian Harvest as the listed company with Namibia Asset Management and Namibia Unit Trust Managers as subsidiaries.

Could you tell us about some of the company’s key figures in recent years?

Currently we have 12 employees. Four form part of the investment team, another four are in administration while the remaining four are support staff, including a receptionist, cleaner, bookkeeper and financial manager. As I mentioned earlier, our assets under management are currently worth N$6,7 billion. Our main source of income comes from charging management fees to our clients. ,We unfortunately cannot give our projections for the year 2006 since we are a subsidiary of a listed company. One thing that we are planning to look at this year is an alternative investment fund because another cause has been created after 9 years: a minimum of 5% of pension funds must be invested in unlisted investments in an attempt to contribute to the development of the Namibian economy. We again see it as a challenge to turn an obligation into an opportunity.

How do you invest?

What we do is to look at it from an asset class point of view. For example we invest 75% of our assets in shares, 15% in government bonds, 10% in cash and then we also invest in listed properties. We invest our money on the Namibian and also on the South African Stock Exchange.

Asset managers can be classified into two categories, life companies, which manage life assets plus third party assets and asset management companies that only manage 3rd party assets. Our company, Namibia Asset Management Company only manages third party assets. We are now managing approximately N$7 billion of the total N$30 billion Namibian pension fund assets. So, I think we are quite a significant player in the Namibian market from the pension fund point of view.

As I have mentioned, having reached an optimal level in capacity building from a staff point of view, we plan to focus next on our products, some of which are alternative investments product such as absolute return products. We also plan to enter an area that was historically the arena of life companies by applying for a life license and then developing retirement annuity products.

Generally speaking, what is the partnership strategy of the company?

We are happy with our current partnership arrangement between Namibia Asset Management and Coronation Fund Managers. On the alternative investments side, we are still looking at some new partnership possibilities as we don’t currently have the skills. To this effect, I have already visited some of the private equity companies based in Johannesburg. We essentially have two options: to either go out on the market, find a private equity specialist and employ the person or go into a partnership with one of the private equity houses.

Your personal experiences are also of interest to us. Could you tell us about your career up to your promotion as CEO of Namibia Asset Management, as well as your greatest satisfaction during your time as CEO?

I graduated at the University of Western Cape in Cape Town. I joined the banking sector and started working at the Commercial Bank (now Nedbank). Thereafter I spent some time at First National Bank on the credit side before working for Telecom for 6 months. After leaving Telecom, I joined Namibia Asset Management and have been with them for the past 10 years.

Concerning my greatest satisfaction, I find this industry that I am working in to be very interesting. The investment industry is always seen as one attracting the most brilliant minds. Each and everyone thinks they have got a way how to beat the market. One may want to predict what’s going to happen tomorrow and to beat the market but unfortunately nobody is ever successful for a very long period of time. It is a very dynamic industry and what I like about it is that each and every day is a different day so the routine element is very minimal.

We’re here in the Republic of Namibia to promote the investment opportunities of the country. What would your final message be to our readers concerning these opportunities?

Namibia is a great country from all angles. On the one hand, it is politically stable and on the other, it is a beautiful country. I also think that the government has done quite a lot in taking part in private sector consultations especially on how to move the country forward. If some of the readers out there have the necessary skills to offer for Namibia to enhance its economy or to assist the country to reach the objectives of Vision 2030, they are more than welcome to join us in building a brighter future for our country.