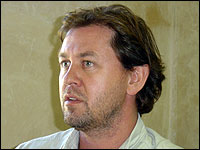 Could you please give us your thoughts about the evolution of the activities of your company here in Namibia?

We started in the early nineties here in Namibia and we stared growing our operations after Independence. We were a very small camping company a few years before independence. We stared as a mobile Safari Operator so we went with people in a Land Rover in the bush with all our camping equipment. We set up a Safari and we would move on. The only thing we would leave behind were footprints .We started then in the lodge business in 1996 with our first lodge which is called the Damaraland Camp and since then we have around about 20 small camps in Namibia. We took the same concept of footprints with our lodges and we want to make as minimal impact on the environment as possible. We build small camps, as small as three, with our largest camp having 20 rooms. These are very small camps in very remote areas and we have a policy of hiring mainly local people and about 98 percent of our staff are Namibian.
What we have done at Wilderness is that we have moved into the highest end. We have always moved to provide the best guiding and the best service in the industry. We have always gone into an eco-friendly approach to business, so we sell to a niche high-end market. Before independence, there wasn’t a single lodge here in Namibia that was selling to the high end. There weren’t any expensive lodges here in Namibia. There were only middle-market ones. So we have developed along with a few other players since independence a high-end market that means anything more than US$300 per person per night. We range from about US$300 to US$1000 per person per night and that does not include getting there by road or by air.
It’s really a specific market for fairly wealthy people but also people that like conservation, nature and community input as well.

Could you give us some key figures about your company, how many employees you have and your budget?

We have about 500 employees and our turnover is about N$100 million a year. We have round about 20 lodges all in rural areas and we employ mostly local people. The key thing about developing rural areas for our company is that it creates employment and it is an investment to an area, which has virtually no industry, so it’s creating industry, its creating wealth and the third thing is we are empowering people. We try and educate and train the people of the area and we also involve them in he running of the camp in terms of management, equity and earnings and also in terms of being a landlord we pay the local communities a rental to be in their area.

You told us your clients are fairly wealthy people, from which countries do they come from?

Ninety percent of our clients come from outside Africa and about 10 percent of our business from South Africa and Namibia. We also do have some specials for local Namibians and people from Southern Africa to make our camps more affordable to locals, this is usually in off peak times so that they can see some of the unique areas in which we operate. We operate in the Skeleton Coast, on the edge of Etosha, the edge of Sossusvlei and in Damaraland, some of the most beautiful parts of Namibia.
So there is an opportunity to get there at a reasonable rate during the quiet times of the year. Our main single market is America, which accounts for about 25 percent of our business, the UK is probably another 20 percent and the rest is Europe.

How do you promote yourself in the USA?

All around the world, we only do it through our channel, recognised African specialist tour operators and travel agents. We don’t deal directly with consumers and the reason for this is that the specialist tour operators around the world that sell Africa are adding value by doing most of the reservations & marketing and we support them with certain marketing efforts. But generally, we outsource a lot of marketing to these agencies.

What are your competitive advantages compared to other safari companies?

We operate in some unique locations, in Sossusvlei we are the closest to the actual sand dunes in Etosha we operate in an area called Ongava game reserve which is he finest private game reserve outside the national park in Namibia. It’s got black and white rhinos and all the big game one wants to see. So one has the opportunity to view private game and walks but also to see Etosha National Park, which is a prime game viewing area.
In the Skeleton coast Park, we are the only tour operator that operates inside the northern coast, which is north of Mowe Bay and we also operate several community camps in the Damaraland area, which have unique features. One is on the Kunene River bordering Angola in the middle of the Himba people. There are about 100 000 Himba people in the northwest. They are very colourful looking people and a lot of them are living a cultural rich lifestyle very similar to nomadic pastoralists of East Africa like the Masai. These people are still living a lifestyle that is very interesting to our guests and we are very keen to show our guests the cultural experience without impacting the local people.

You have 20 lodges, are you planning to build more lodges in future?

This coming October there is the Tourism conference that will gather more than 150 tourism projects here in Namibia with the same amount of investors from America and Europe, would you be interested to partners with one investor from the USA to build more lodges and safaris?

Yes we would like to see American investors would have to offer and we would be interested to meet them.

Do you already have some ideas of new projects that you would want to partner with other companies?

I don’t think fundraising is the main issue but the value the overseas companies can add to our products. How can they add value to the marketing side of the equation for Namibia, what skills they can bring in, can they bring in training, can they empower the local people in terms of training and education, so that’s what we would want to know from the investors. What benefits they bring other than just funds because for us when we make an investment we have to agree on broad based empowerment, projects that support social responsibility programmes, for instance we have a children’s’ education programme, which deals with 100 kids each year and takes them on summer camps for a week. So it would be the ethics of the investors that would be important for us to be interested in joint ventures.

How do you see the future of the tourism sector say in he next five years?

We think there is an opportunity on the high-end market. Namibia has only been established recently as a destination for people that can spend US$ 500 per night and in the last five years in Namibia there is property that can offer quality and service. There are countries in Africa that have been offering Safaris for many decades and we are a new entrant into the very top end. We also fee there is a market for responsibly managed products much more than in the past. People want to consume a product that has lesser environmental impact and has significant benefits to local communities. That look after its employees and that has other benefits for communities, such as ownership and proper payment from people operating in an area. Those factors we feel are very important to consumer choices not only on tourism products but all products on the market. A lot of people especially in the tourism sector like to market themselves as eco friendly, but there are some more eco friendly than others.

We are also interested in the man behind the position, so could you lease tell us about your professional background?

I studied economics at university in Australia then I left and travelled through Europe and then I bought two Land Rovers with a few friends and drove to Africa. And when I got to Africa it felt like very much like being at home and in fact I never left. Since then I have worked in two safari companies, ne whose main activities were mainly Kenya and Tanzania and then I started with Wilderness Safaris in 1992 in Botswana, so I worked seven years in Botswana as a guide, camp manager, general manager and then I was asked to come to Namibia to carry on with Wilderness Safaris in Namibia. At that stage we had about three camps and we’ve grown the business to 20 now.

What has been you biggest satisfaction since you have been the managing director of this company?

I am very proud to try and leave a legacy of good management in terms of the environment again, in terms of sharing benefits with the communities, broad based empowered groups and in terms of setting up a better training programme for our staff. We have guide training, every single members of our staff has a various form of training. The guide-training programme, which is part and parcel of our company because that’s where the guests actually touch our products. They are Namibia’s ambassadors for tourists and that’s the only person they will meet on a tour. We have partnered with USAID and a local Non Governmental Organisation called NACOBTA which has helped us find good people in the rural areas of Namibia. We have employed several people from these courses we just look at their attitude and their personality and if they’ve got the right personality for tourism, if they are outgoing and if they are passionate about wildlife and conservation then we can train them into being wildlife guide, so they can come from anywhere in Namibia. We have found that the talent in the comes from rural areas and infact eighty percent of our business employees are in rural areas. And to identify someone in rural areas, give them a job in that same rural area so they don’t have to leave they don’t come to the city to look for a job, these are very intelligent people who can have a well paid professional career in the remote areas of Africa. And the idea is that if you empower people around wild areas, empower them with education and training, with benefits such as equity, fair rental for the land and they may have a vested interest protecting wilderness areas for the future, not just for Namibians but for the whole of the planet.

We are here in Namibia to promote the country abroad especially in the USA, what is your final message you would want to send to our readers about Wilderness Safaris?

One of the key things we say is that we believe that the world’s wilderness areas will save human kind, and it’s big statement, butwe believe in it, and we believe these areas should be conserved for many generations. In Namibia it can be conserved and utilised to create and grow sustainable businesses for people of the rural areas and people around the globe. Here we have a unique product that only Namibia has in terms of our wilderness areas. So we think it’s a sustainable business that could last for many thousands of years, millions of years hopefully!
In-fact this resource can last forever and we believe that wilderness areas will not only help develop Namibia’s economy but that we can use it as an example for the rest of the planet and that will send a message of hope for wilderness areas all around the world.