Minister of Trade and Industry (Government of Namibia) 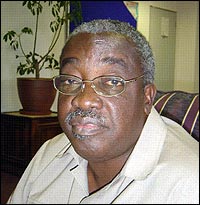 Could you give us your thoughts on the evolution of the Ministry activities from its creation to today?

One of the new Ministries created at independence; took over some the functions previously done by the Department of Economics; the activities, then, mainly concentrated on creating a structure for the Ministry, staffing that structure and making it work.

Could you tell about some of the Trade and Industry sector key figures from the last 3 years?

There are certain incentive regimes designed to give the competitive edge to Namibia-based entrepreneurs who invest in manufacturing and re-export trade. What are the policies and strategies driven by your ministry to promote your sector?

Investment flows into the Namibian economy remain a high priority of Government. Both domestic and foreign investments into the economy are required to increase the level of gross fixed investment and capital formation without which growth in the country’s production and export sectors cannot be realised. It is from such investments that economic growth and diversification as well as high levels of employment creation and increased income can be realised.

Thus, in addition to the Foreign Investment Act of 1990 (as amended in 1993) which gives investors the required confidence to invest in the country, provides for the repatriation of profits and the protection of investments with an option for international arbitration and guarantees investors against expropriation, other legislative measures and support incentives were introduced to further enhance the country’s competitiveness.
The other important legislative measure taken to create a conducive environment for foreign investment was the Export Processing Zone (EPZ) programme, which went into operation in 1996, following the promulgation of the EPZ Act in 1995. The Act provides beneficiaries with exemption from all forms of taxation and allows for the holding of a foreign currency account. Furthermore, the EPZ Act provided for the setting up of the Offshore Development Company (ODC) to administer and promote the EPZ regime. This mandate is performed in conjunction with the Namibia Investment Centre.

The NIC is a very important economic component linked to your Ministry. Could you define their functions in relation to international investment promotion?

Namibia has an abundance of natural resources. Among these are a wide range of mineral deposits, including world-class diamonds and uranium, as well as copper, lead, zinc, gold, semi precious stones, industrial minerals, salt and fluorspar. Our rich fishing grounds place us among the top 10 nations of the world in the international fishing industry.

Such valuable resources mean that mining and fishing are two of our most important economic sectors, together with agriculture, including a thriving red meat industry, and tourism. The latter is a rapidly growing sector, and is becoming a major earner of foreign exchange and generator of income for the nation.

Our infrastructure is superior to that found in many places in the so-called first world. We have an excellent road and rail network, including trans-continental links to the Atlantic seaport of Walvis Bay, which, with its world-class standard of cargo handling and sheltered deepwater harbour, is poised to become the most important port on Africa’s west coast and a regional container hub for southern Africa.

Good prospects also exist for extensive horticulture, such as, olive oil, jojoba and cut flowers. Government also proposes cotton production and the establishment of a cotton ginnery as investment opportunities. This in turn will supply Namibia’s emerging textile industry with the necessary raw materials.

Spectacular scenery and wildlife makes Namibia a tourist haven. Leading to the lodges and resorts are excellent road and accommodation infrastructure. A warm climate and friendly atmosphere of Namibians provide great ingredients for a burgeoning tourism industry.

There is an exceptional scope for manufacturing investment and value addition to our local natural resources for domestic, regional and international export markets. The following areas are promoted for the manufacturing sector:

Your government has set a goal that you call “vision 2030” which aim is to see the country prospering in many ways (economically, poverty eradicating, attract international investments). How would your ministry contribute to this?

MTI has a pivotal role to play in the achievement of Vision 2030. At the end of the day, the question of a developed country status will be decided on the basis of the structure of the economy. The manufacturing sector should be making the most prominent contribution to the GDP of the country. This will, depend on how successful our industrialization policy is, which in turn depends on the competitiveness of the Namibian economy. In a practical sense this requires that maximum investment is attracted to Namibia, the gross capital formation is increased both by local and foreign direct investment, the economy moves from resource-based to knowledge based.