Founding Father of the Republic of Zambia (N/A) 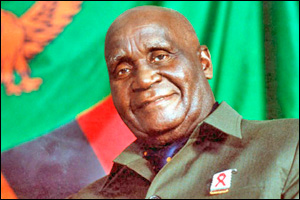 As the founding father of Zambia, you were present during the colonial ruling and you managed to lift Zambia to its independence in 1964. What were the main challenges you faced when you became the First President of the Republic of Zambia?

The first thing we ought to remember is that we have 72 tribes in Zambia, and therefore we had to work in such ways that we help bring unity among these numerous tribes.

We were guided by the teachings of God Almighty, who demands that man shall love God with all one’s heart, mind, and soul. Man should love their neighbour as one’s self, and to do unto others as one would wish done unto them.

These were the teachings or principles, which we depended on in order to build our nation. These same teachings were very important because they acted as a guide to keep Zambians in the right path. Hence, we work out a system, which would bring us closer to God’s teachings, and the slogan ‘One Zambia, One nation’ was coined. Everything we did as a country had to be guided by these principles. It has been 50 years and Zambia is still united under this slogan.

United 72 tribes together was a major challenge. How did you manage, as the First President of Zambia, to overcome such thing?

It was very important and a difficult situation for us as a country. We still had our small tribes and we still did not know what was coming ahead of us. We had to build all this up into ‘One Zambia, One Nation’.  Living this slogan is not just something that was talked about, but something that Zambians believed in, and they began living and behaving in the spirit of unity as quoted in the slogan.

As the First President, you have implemented humanism and nationalisation of the economy. What were the main reasons for doing so?

Humanism formed a basis to guide everything that was done or implemented in the country. Moreover, the economy has to be nationalised to help raise the standards of living for the poverty stricken people.

At the time, there was racial segregation and the challenge was to tackle this situation. It was important for people to understand that it was not their colour that mattered, but rather the behaviour of the person. As such, humanism became important and it helped us overcome racial segregation.  The concept of humanism meant that all human being lived united according to how God wants them to live.

I understand that you nationalized the economy for people to gain equal access to the country’s national resources and also to create a certain environment of equality. In your own words, explain us the importance of such a manoeuver for a young country.

The nationalisation of the economy was intending to bring people even more together. Instead of living separately, we came together, believing that poverty had to be fought together across all races.

While humanism acted as a guide to keep people together, nationalisation of the copper mines meant that all the proceeds realised from the sales of copper would be used for the benefit of the larger population as opposed to just a small section of the population.

Under our humanism approach, schools that were initially restricted by race were now open to everybody. This worked very well giving the rise to nationalisation of the economy.

Zambia is one of the fastest growing economies in Africa. Are you proud to see Zambia achieving such rate of development?

I am 91 years old now and I am really proud of my country. Things are moving the way we wanted them to. Although there have been difficulties, they have been managed and the economy is picking up and we are strong.

As you must know, Mr Sata was in my Cabinet when I was president and he exhibited himself as a very strong young man.  We worked together very well. He managed to construct and build strong infrastructure for the country. There is a road network that was undertaken under his presidency that will facilitate my life but the lives of millions of Zambia.

I wish to say that my country has achieved a lot and it will probably achieve more.

What legacy would you like to leave behind for the newer generations?

I am one of the two founding fathers remaining in the region along with Zimbabwe’s Robert Mugabe. I am happy with the developments that have taken place across Zambia. When you decide to return to Zambia five years from now, you will be amazed at the rate of development the country would have recorded.