Myanmar, Republic of the Union of: Interview with U Thein Win Zaw
All Interviews

2018-01-18
Click here for more Interviews In Myanmar, Republic of the Union of 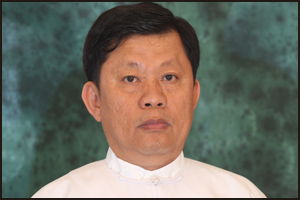 On the ease of doing business rankings 2017, Myanmar ranked the lowest among the ASEAN countries. As an example, while Malaysia ranked the 23, Myanmar was relegated to the 170 position out of 190 countries. What are the priorities to improve the business climate?

The first issue is that the Investment Law is very unclear, the government changed it recently and introduced too many changes, and the second handicap is the human resources in Myanmar. The national employees have a low level of preparation, for instance, Chinese workers can demand higher wages, as they are skillful and well prepared. As an example, we rented a garment factory to a Chinese company and they said that they prefer Chinese managers because they are more efficient and keep a higher production rate.


The trade balance of Myanmar in the first six months of this financial year registered a 2 billion USD deficit; while the exports were valued at more than 7.2 billion, the imports reached almost 9.3 billion. Why a country that is so rich in natural resources keeps a negative trade balance?

There are four main factors that produce this gap in the trade balance: there are many Burmese citizens working in other countries, like Thailand or Singapore, but they send the money into Myanmar through non-official channels, and therefore those are illegal remittances that are not statistically registered. The second factor is agriculture, our system is inefficient because we have not modernized the sector and we lack a mechanization of the production. Electric supply is another issue, as it is not consistent and even in urban zones there are power cuts, so the blackouts damage the manufacturing industries and their production decreases, which obviously makes the exports drop. In addition, logistic charges are very high and inefficient compared to other ASEAN countries, so if we want to develop the economy, another priority should be infrastructure.


During the last 20 years, Shwe Byain Phyu has developed a petroleum retail stations chain with over 20 selling points. The company is today a country leader in the petrol import, trade and distribution for domestic use. Can you tell us more about the history of the company?

Our first activity, back in 1996, was providing logistic services to the government related to petroleum; we used to deliver petroleum products with small ships. Our next step was to expand our activity to marine products. In 2008, as a result of the damages caused by the Cyclone Nargis that hit Myanmar in 2008, the government could not maintain the energy supply and they granted import licenses to some companies, and we were among them.

Trading was a great challenge at that time because the importers had to pay in US dollars while the government used to register the trade money in local currency. Therefore, the only way to do it successfully was to have dollars earned from exports, which was our case thanks to the trade of marine products. Since we got the import license during the cyclone, we started to import 3,000 tones cargos from Singapore in Myanmar in 2009, a level that we increased gradually year per year. Today the four pillar of the company are petrol retail, mining, marine products and other commodities trading.


During our interview with the Minister of Industry, U Khin Maung Cho, in October, he said that Myanmar “has a great potential as economic and trade hub thanks to its strategic geographical location”. As a trading leader, which countries are your main trade partners?

Singapore is by far our main partner, our cargos with petrol come from there and, logistically speaking, they are the hub for petrol products in Southeast Asia. However, we are still at a point in which we would be happy to find new partners in other countries. In the marine products field, we have different plants to manufacture the seafood that we buy from local people and ultimately we import to China.

As a country, education and determination will be the key factors to become an important logistics hub and, from the government’s side, they should ease the bureaucracy procedures.


During our interview the first of November with the President of the UMFCCI, U Zaw Min Wi, he mentioned that Myanmar is facing an unfair competition with smuggled products from other countries. It is a common complain among business people. Does illegal trade affect the petrol trade in Myanmar?

The situation has slightly improved. In Yangon, the illegal trade is not significant, the big problems are in the peripheral areas, where there are even petroleum products coming in without control. It is an unfair competition for those like us that apply for an import license and comply with the regulations. Our strategy, in order to avoid competition with the illegal traders, is not to supply to those bordering regions in which they operate. Due to logistic costs, it is not profitable for them to supply to Yangon and central areas of Myanmar, which is our market.


Shwe Byain Phyu has been recognized several times as one of the most compliant companies in Myanmar in terms of taxes payment. In the 2016-2017 fiscal year, you were the 4th Overall Commercial Tax Payer Myanmar and the 5th Overall Income Tax Payer Myanmar. However, one of the main challenges of Myanmar’s economy is tax collection. What is your policy in terms of transparency and how can Myanmar improve tax collection?

The main reason that makes us one of the highest income taxpayers is that we pay whatever the authorities asks¡ for, while other companies try to negotiate their contribution with the state. We want to be as transparent as possible in a time in which foreign investors are coming to Myanmar; therefore we prioritize being transparent by paying all taxes. The foreign companies want to partner with this kind of companies. In addition, Myanmar has just become a democracy and it is good to support the country in this way.

At the state level, the government has indeed a lot of problems with tax collection, perhaps due to the illegal trade and remittances through the borders. They should be more restrictive in the bordering areas in order to enforce legislation.


A particularity of Myanmar’s economy is the fact that many companies are family business in which the second generation is taking over. What is the difference between the generation that founded the business and the new one taking over?

The first generation had to work in a very different environment, with many restrictions and a military rule, so the style of doing business was really different. Now, the new generation has had the opportunity to study abroad and are able to develop new business and increase the size of the companies. The country is opening up and the markets are getting saturated and the benefit margins have narrowed, which may make it even harder for the new generation. Today, we have to face both domestic and international competition, and it will be the decision of the government whether to establish protection laws or not.


You are leading one of the business leaders of the country that have experienced many different stages in Myanmar’s history. Today, the country is carrying out a liberalization process and an opening to the global economy. What is your vision for the future of your company?

We want to become a public company in the Yangon Stock Exchange. Today, the trading is losing value in Myanmar so the stock market is not performing very well. Also, people here do not have the proper knowledge of how this kind of market work, so it is a goal that we hope to achieve in the middle term. This is just the beginning of the stock exchange and we will be part of it in the future. Our goal for the near future is to reach 100 petrol retail points in Myanmar. On the other hand, as the country is opening up to the world, we want to partner and work with other foreign investors.